Sniffing out stoner friends or cannabis connections used to be more of a challenge. In darker days, smokers had to conceal their hobby as best they could, leading those on the outs to develop sharp noses and an ear for marijuana slang to find those in the know. Clandestine meetings were arranged. It was silly, but it was necessary, and still is in some areas as cannabis remains illegal for roughly one third of Americans. Thankfully, there are several new ways to find stoner friends, as well as some old reliable tricks.

This article reviews how to find stoner friends in your area, including stoner dating apps, and how to find 420 events. 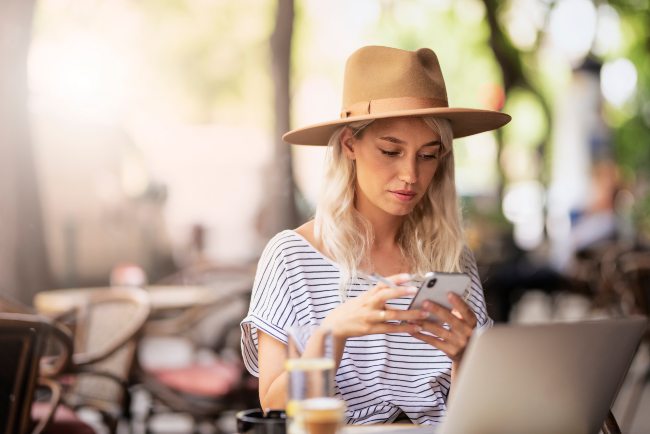 There are many dating apps available to find stoners who enjoy cannabis as much as you. photo credit

Most niche groups have their own dating apps, and cannabis consumers comprise a pretty wide niche group, so of course there are several cannabis dating apps. The most popular option is High There!, which has recently enjoyed an increase in female consumers, but the app has attracted a whole collection of consumers, growers, and enthusiasts looking for like-minded folks nearby.

Other cannabis networking apps include 420 Singles and 420 Mate. 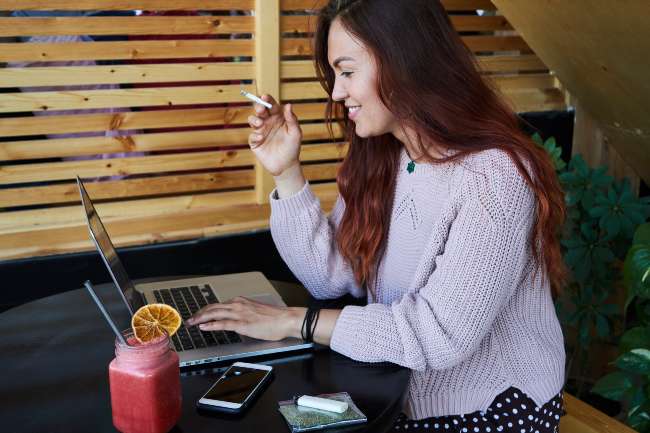 There are some truly wonderful online communities that have developed out of dispersed people with common interests. If no one in your area is interested in cannabis the way you are, there’s almost certainly a forum or community that would love to hear from you.

The subreddit r/trees is a common stop for many cannabis consumers who can point toward even more specific communities for growers, workers, medical consumers, and more. Other popular forums include Grasscity and Rollitup.

The pandemic has made it harder to make and maintain friendships in person, so online communities have swelled in the last two years, even including virtual smoke sessions with friends. 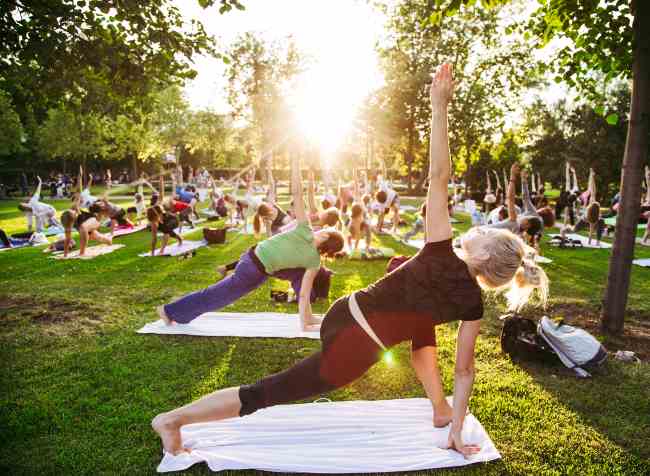 Connections are made online, but friendships develop in person. To dive into the local cannabis scene, find some cannabis-themed events in your area and get out there!

Meetup and similar sites are the easiest way to browse for events in your area which could include anything from cannabis-inclusive yoga to live music performances, or local entrepreneurs and canna-business groups meeting and networking. Of course, if there’s nothing going on, you could always host your own 420-themed party.

PotGuide also offers an annual event guide that is great for travelers or those looking for events in their state. In states still under prohibition, consider going to a legalization rally! 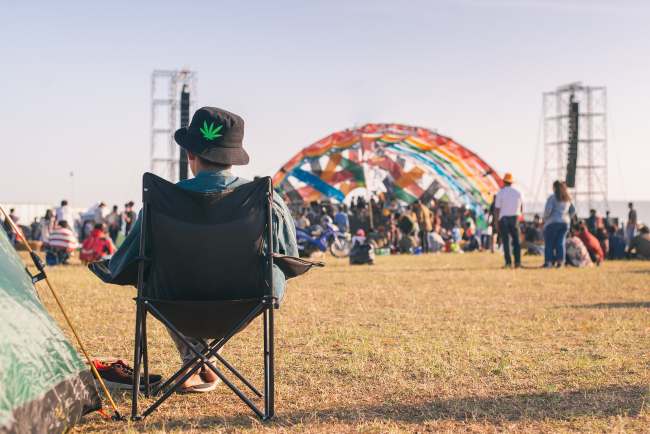 Rocking a hat with a pot leaf might help you draw in other stoners at a festival. photo credit

For cannabis consumers who don’t mind being identified, but only want to identify others, there’s no shame in displaying the iconography. Cannabis clothing and accessories are easier than ever to come by, especially if you’re shopping online.

Maybe wearing a pot leaf pin was akin to flashing a gang sign in the ‘90s, but cannabis is recreationally legal for one third of Americans, so most people’s eyes will glaze right over it. The compliments on your pin, hat, or handbag will inevitably come from others in the lifestyle.

Go Where the Action Is 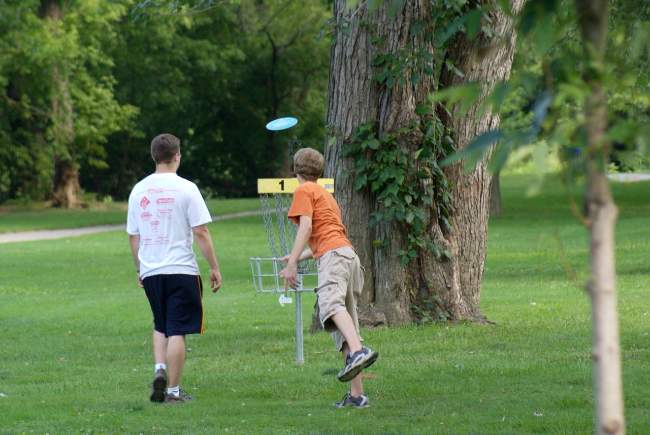 Get yourself out there and look for people on the green or walk into your nearest head shop. photo credit

Sometimes the best way to get involved is to just walk in the front door. Admittedly, this is a scary prospect for consumers or advocates who would prefer others to identify themselves first. However, if you ask about the scene at your local head shop or CBD bar, as well as if you join a local frisbee golf league, you will almost certainly be welcomed by enthusiastic and like-minded people.

Ask For a Lighter 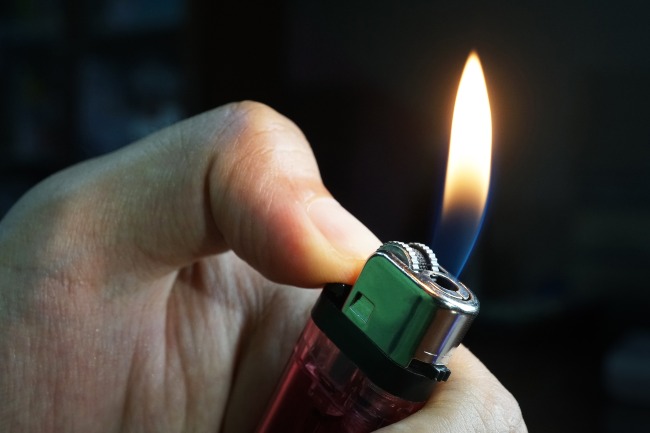 Ask for a light when you’re out and you might be surprised they smoke more than cigarettes. photo credit

This is a holdover from a more surreptitious time, but asking someone for a lighter is a quick way to find out whether someone smokes something. The catch is that you should probably be about to light something as well. Of course, some of the time you’ll catch a cigarette smoker on the line, but even sharing a tobacco break with someone can turn the conversation toward other smoking hobbies. 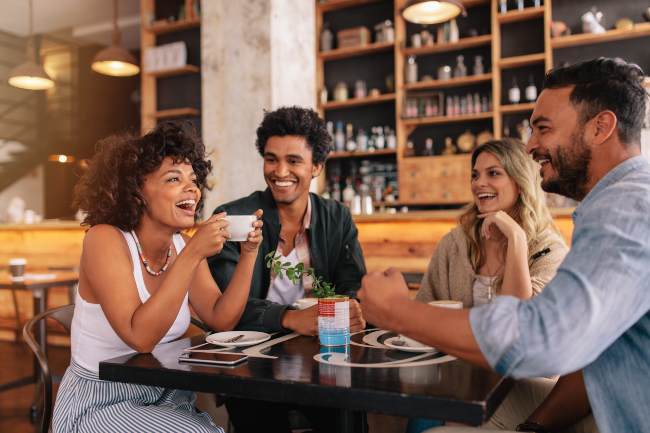 Go ahead and ask people you see at your local coffee shop if they smoke because more people do these days. photo credit

Regardless of where you live, cannabis has never been more accepted than it is right now, with up to 9 out of 10 Americans supporting some form of legalization. Whomever you ask may not be a consumer, but they’ll almost certainly have an opinion on the matter, and it will probably be positive, or at least tolerant.

The point is: you are unlikely to offend anyone by asking their opinion on the matter, or even by revealing yourself as a user. In fact, whoever you talk to could be looking for a stoner friend too.

Social media apps like High There! or 420 Mate are great for dating, friendship, or networking, and other online communities like Reddit host several more niche or regional groups perfect for finding people in your area. For those who don’t mind announcing their own use or interest, cannabis clothing or insignias like pins can be worn to signal that interest to those around you, which will at least garner a few compliments.

When in doubt, lean into the old stereotypes and check out the local head shop, join a frisbee golf team, or go check out laser Floyd at the planetarium. That last example is mostly a joke, but the point remains: go where stoners go, and you will find them, and they will be glad you came.

Where Can I Find Stoner Friends?

There are dating and networking apps designed specifically for cannabis-consumers including High There! And 420 Mate. Online communities like subreddit r/trees has nearly 2 million members with more regional communities within. Other consumers can be signaled through clothing including patches and pins.

Is There An App to Find stoners?

Yes, there are several dating and networking apps aimed at cannabis consumers including High There!, 420 Mate, and 420 Singles.

Is There A Tinder for Potheads?

Yes. Apps like High There!, 420 Mate, and 420 Singles all bill themselves as tinder for potheads.

How do you find 420 friends? Let us know in the comments below!