Arizona voted to legalize recreational cannabis in November of 2020 and the market went live in February of 2021.

Since then, Arizona has quickly grown into one of the largest cannabis markets in the U.S. Recent data shows that recreational sales hit a new all-time high in October.

Here are some more details from the Arizona Mirror.

Marijuana sales in Arizona hit record highs in October, with nearly $58 million in estimated sales of recreational cannabis for the month, according to state tax officials. The previous record for adult-use marijuana sales was in July, when dispensaries sold $54.5 million of cannabis. 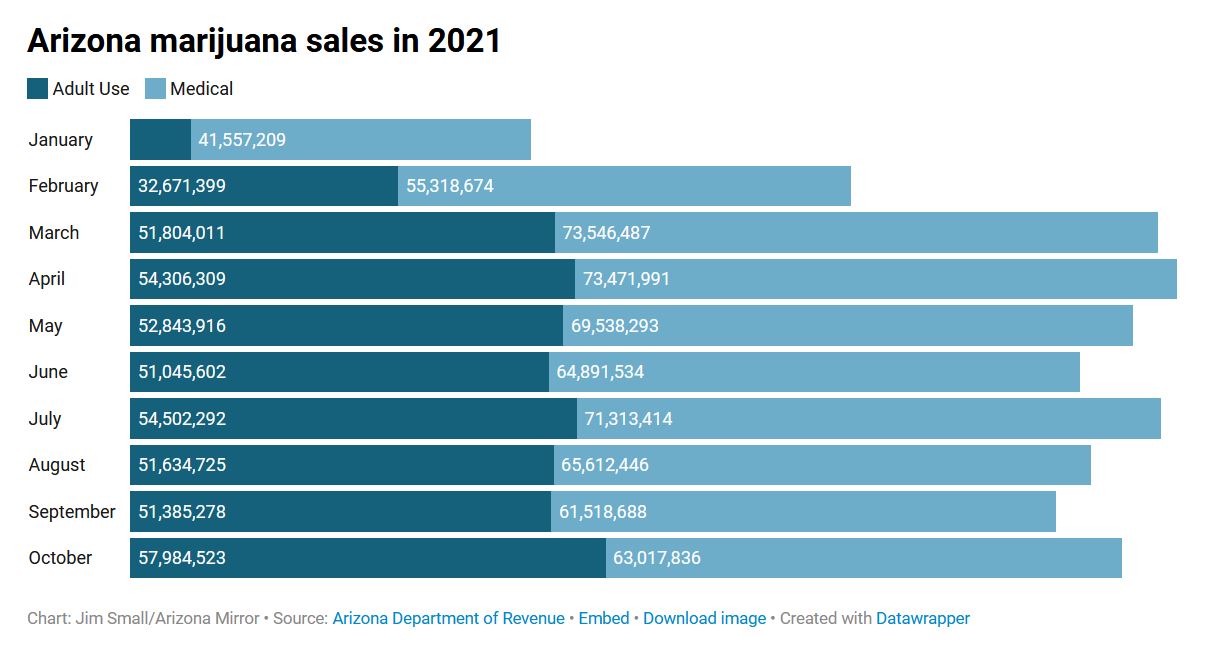 Looking forward, Arizona’s cannabis industry is still in its early stages. The market should continue to prosper in the next few years as the state adds more dispensaries and more consumers move from the illegal market into the legal market.

Investors interested in playing the trend need to check out a cannabis stock that is the largest player in Arizona and also one of the largest cannabis companies in the U.S. market.

Trulieve Cannabis Corp (CSE: TRUL, OTC: TCNNF) is the largest cannabis company in the U.S. with a market value of around $5 billion.

The company operates in eleven states and owns 155 dispensaries. Trulieve has traditionally been considered a play on Florida, where the company is headquartered and owns and operates 113 dispensaries.

However, in 2021, Trulieve made the largest acquisition in the history of the U.S cannabis industry, buying fellow industry leader Harvest Health and Recreation (CSE: HARV, OTC: HRVSF) for $2.1 billion. The merger created the largest cannabis company in the U.S. Here are some more details from the press release when the deal was announced.

Upon completion of the Transaction, as well as the closing of other previously announced acquisitions by Harvest and Trulieve, the combined business will have operations in 11 states, comprised of 22 cultivation and processing facilities with a total capacity of 3.1 million square feet, and 126 dispensaries serving both the medical and adult-use recreational cannabis markets.

Trulieve Shares are Down 50% from the 52-Week High

Trulieve shares have been weak with the broader cannabis sector in 2021 and shares are currently down 50% from the 52-week high. More recently shares have developed a key level of support around $25.

The Big Picture on Arizona and Trulieve

Arizona has quickly grown into one of the largest cannabis markets after legalizing recreational cannabis in early 2021.

Investors looking to play the trend should check out Trulieve, the largest operator in the state after executing the largest acquisition in the history of the cannabis industry.

The post Arizona to Top $1 Billion in Cannabis Sales in 2021 appeared first on Cannabis Stock Trades.