Are you looking for a treat for your nose? The candy cream buds smell “almost” exactly how it sounds. The strain itself is a 3 way cross using one of the first strains I ever grew which was the white rhino.

Like mentioned above, the candy cream is made up of 3 really solid genetic backgrounds. The parents are the blue black x maple leafe indica x white rhino. This strain is mostly made up of indica lineage ( obviously ) especially with the white rhino in the mix. 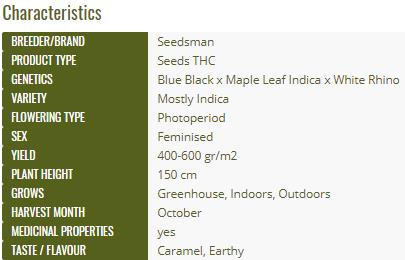 Candy Cream is a typically indica-structured plant which develops dense buds along its many side-branches. It was bred from crossing Blue Black with Maple Leaf Indica and White Rhino. This 90% indica strain has a rich, sweet caramel flavour with earthy undertones.

Although it can do well in all environments the best results are to be had indoors where yields of up to 600 gr/m2 can be harvested in just 9 weeks of flowering.

I currently suggest going here – to buy the candy cream seeds whether auto, feminized or regular ( when they have them ).

You can also order them from a couple other online seed banks but I would check first on the reviews before spending cash elsewhere.