In 2018, Minnesota made news when the Department of Health added Alzheimer’s Disease (AD) to the list of qualifying conditions for the state’s medical marijuana program. After years of cautious optimism from preliminary trials, the headline looked like a confirmation that cannabis could, in fact, treat Alzheimer’s. However, Commissioner of Health Jan Malcolm was quick to quell any excitement.

“Any policy decisions about cannabis are difficult due to the relative lack of published scientific evidence,” she said. “However, there is some evidence for potential benefits of medical cannabis to improve the mood, sleep, and behavior of patients suffering from Alzheimer’s disease.”

It was an important distinction to make — treating the person, not the disease — otherwise, the state would have been the first to confirm a direct link between cannabis and Alzheimer’s, not to mention undermining the FDA, who have stood still for years waiting for clearer evidence of cannabis’ ability to treat the disease.

And yet, the Minnesota Department of Health was under public pressure to add Alzheimer’s to the medical marijuana program, and they’re not alone. Alzheimer’s shows up on the qualifying conditions for 12 states and Puerto Rico. So if the science is still out, why is cannabis so in?

Alzheimer’s Disease (named for German psychiatrist Alois Alzheimer) is a degenerative brain disease and the leading cause of dementia in the US. In 2020, up to 5.8 million Americans were living with Alzheimer’s — a number that is expected to rise to 14 million by 2060. 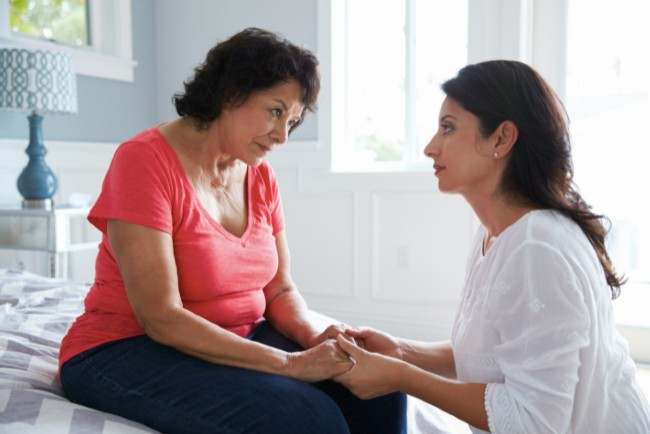 The number of people living with Alzheimer’s is predicted to increase rapidly over the next 40 years. photo credit

For about the past five years, preliminary and in-vitro studies treating Alzheimer’s with cannabis have stirred hopes that a cure might soon follow. It’s true that cannabinoid therapy and medical marijuana can relieve some symptoms of AD, but there is not yet any smoking gun connecting cannabis to the end or reversal of the effects of AD, nor can it yet be anointed a preventative treatment. That doesn’t mean there’s nothing to see here though because cannabis has shown some remarkable results in specific tests.

Does Cannabis Help With Alzheimer’s Disease?

One of the earliest signs of Alzheimer’s is the accumulation of amyloid beta-amino acids that form a plaque in the grey matter of the brain. While this plaque is not the primary cause of Alzheimer’s, it does seem to have “downstream effects” on other parts of the brain that advance more aggressively toward Alzheimer’s.

This study from 2014 formed the basis for much of the excitement that has followed. In it, rats treated with a combination of THC and CBD during early symptoms exhibited “preserved memory,” and researchers recorded “a significant decrease” in dangerous amyloid levels.

In other groups, THC and CBD were used individually, but the results were sure to make clear, “the combination of THC and CBD exhibits a better therapeutic profile than each cannabis component alone.” 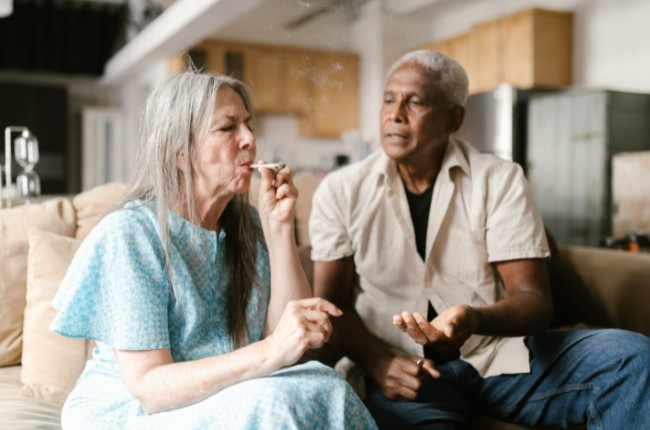 The study showed the importance of combining both CBD and THC in order to receive the full therapeutic benefits. photo credit

In 2016, professor of behavioral neuroscience at Ohio State University Dr. Gary Wenk echoed this optimism in a piece for Psychology Today. “The evidence available from studies of humans and animal models of Alzheimer’s disease do indicate that… exposure, during mid-life, to the complex blend of compounds found in the marijuana plant can effectively slow the brain processes underlying Alzheimer’s disease.” However, two years later he clarified that endorsement, telling Healthline, “what we know for certain is that it is not a treatment for Alzheimer’s.”

What he means is that cannabis is not a viable treatment once Alzheimer’s Disease has been established. “By the time you’ve got it,” Wenk says, “it’s too late.” Dr. Wenk does admit that people who smoked cannabis fifty years ago are not getting Alzheimer’s at the same rate today. But preventing a disease is not the same as treating or reversing it once it has begun.

The Role of Terpenes and Flavonoids

In 2016, research out of the Salk Institute for Biological Studies led by Professor David Schubert found that THC and other cannabinoids “promote cellular removal of amyloid-beta.” And in a 2019 interview with Forbes, Dr. Ethan Russo confirmed that, “THC and CBD have been shown to interfere with the production of abnormal toxic matter in the brain,” but he is also quick to credit terpenes, not just cannabinoids, for these successes. Alpha-pinene, in particular, has been shown to sustain acetylcholine, which preserves memory.

This synergy between cannabinoids and terpenes is called “the entourage effect,” the cumulative effect of all ingredients — active or otherwise — in cannabis plants. This effect is lost in products that isolate cannabinoids, or add different terpenes after the originals have been stripped in the extraction process.

The role of terpenes and flavonoids was previously alluded to by Dr. Wenk, who stressed “the complex blend of compounds found in the marijuana plant,” and is supported by David Meiri at the Technion-Israel Institute of Technology, who credits, “just a few cannabinoids or families of cannabinoids” with relieving Alzheimer’s symptoms, “but mainly probably flavonoids and terpenoids.”

The Minnesota Department of Health did not specify the studies that prompted Alzheimer’s to be added to the list of qualifying conditions (which is not unusual), but said the data they reviewed “found that after cannabis use some patients saw improvements in disruptive nighttime behaviors and agitation.”

While memory loss and communication problems highlight the symptoms of Alzheimer’s, patients also experience irritability, depression, mood swings, and trouble sleeping.  What does seem to be certain, is that cannabis helps these symptoms. This is called “palliative care,” treating the symptoms to ease suffering when treating the underlying disease is impossible. And this is likely how Alzheimer’s has landed on over a dozen Qualifying Conditions lists.

The bottom line is that there still is not enough clear evidence that cannabinoid therapy will treat or prevent dementia in any form, which is why the FDA is in no rush to approve anything. However, the endocannabinoid system does present a promising new front for treating Alzheimer’s specifically, and it has been proven to help ease the symptoms of those suffering.

If you do choose to begin cannabinoid therapy on your own, full-spectrum products appear to have more efficacy than concentrates or isolates. Smoking or vaping flower appears to be the most effective methods. If you don’t have access to full-spectrum cannabis in your area, CBD may offer some relief as well, but buyer beware: many manufacturers and retailers of CBD are eager to make a dollar off your hope. Do your research before buying any CBD products, and make sure they offer easy-to-find results from independent testing, so you can see precise amounts of available cannabinoids and terpenes in the product.

Have you or someone you know used cannabis to help with Alzheimer’s? Share you experiences in the comments below.