Micro-growing has become a delightful trend over the last few years, with forums offering up images of cannabis plants growing in computer towers and shoe boxes, or a sea of single colas rising out of one-gallon pots.

Micro-growing is a form of indoor growing that aims to produce cannabis from the smallest possible space. For many growers, it has become a game to see just how small of a space can still produce the most cannabis. Often, this involves pruning and shaping the plant to limit the plant’s growth and guide it into certain shapes, and inevitably, a new trend emerged: the cannabis bonsai.

What is Cannabis Bonsai?

“Bonsai” does not refer to any specific species of tree, but rather is a growing technique descended from ancient Japan and China. It is the art of growing trees a fraction of their normal size, maintaining relative scale, in order to create a miniature replica of the natural landscape. The result appears as if a fully grown tree has been shrunk to fit on a desk.

Traditionally, the practice of bonsai rewards the practitioner through the meditative practice of caring for the plant. Every time you sit down to tend to it, you build a relationship with the plant that grounds you in the present, and endures after the process is finished. Zen Buddhists who practice bonsai and similar crafts might refer to this as “elevated purposelessness,” an act done for its own sake. That said, you can totally harvest a cannabis bonsai too. But once a cannabis plant has flowered, its life cycle will naturally end. If the plant is kept in its vegetative stage, it can remain alive for years. 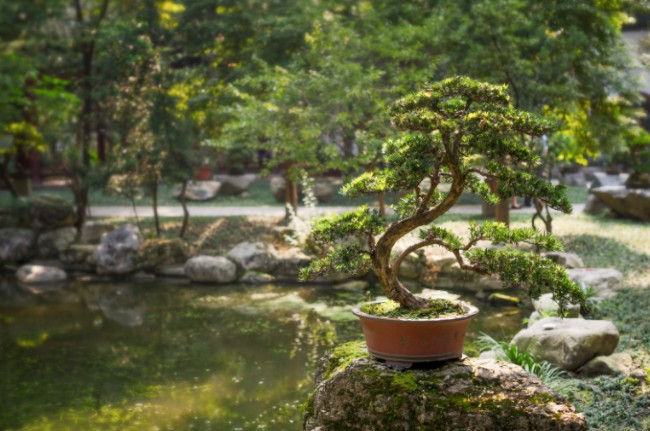 The act of caring for and growing a Bonsai tree is traditionally seen as an art form. photo credit

The process of training or bending the plant may look familiar if you’ve ever grown before and administered low-stress training (LST). Low-stress training is a growing technique that softly stresses the plant by bending the stems and branches to induce more, or more efficient, growth. One common example is using a mesh screen to even out a canopy, called a Screen of Green (ScrOG). The opposite of this is high-stress training, like “topping,” which goes as far as breaking the plant.

More than a beautiful form, canna-bonsai can serve a function in growing as well: cloning. Miniature cannabis plants are perfect for sustaining genetic lines and producing small limbs that can later be cut and transplanted to grow a full-sized plant.

How to Grow a Cannabis Bonsai

Select a small pot or tray. The small container limits everything from the reach of the roots to how much nutrients the plant can hold. These limits, combined with your pruning and shaping over time, will determine the plant’s ultimate size. There is nothing genetically different about a bonsai tree, you are only playing with the plant’s ability to fit whatever space it’s given. 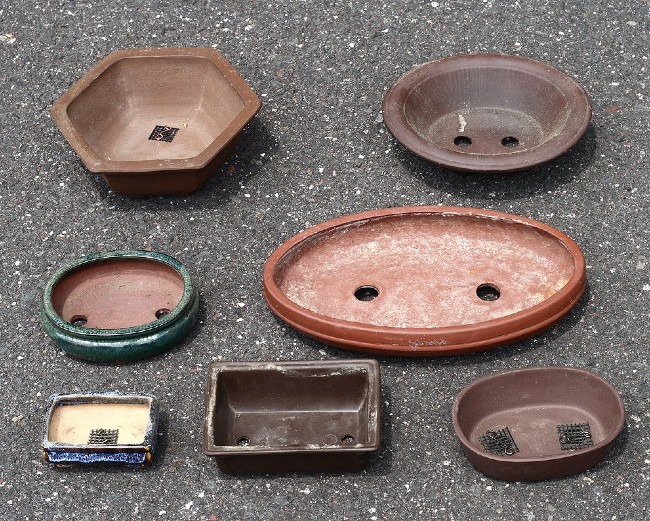 Traditionally, picking out the pot can be just as important as growing the tree itself, as the two should create a form of harmony together. photo credit

In the rim of the small pot, drill several holes. You’ll be threading soft wire or twine through them to pull branches, influencing them to grow in a given direction. If you are using a tray, or don’t have a drill, you’ll need some other way of anchoring or influencing the direction of the branches. Consider tying a stone or weight to the branches that you can then move around the pot to bend them (though do not hang anything, and risk breaking a branch).

The first bending you’ll do is with the main stem, or “trunk” of your tree. Many bonsai trees do not grow straight up, but are often bent into more striking or fantastic shapes. Sink a stake into the soil beside your stem, careful not to damage any roots. The stake will act as an anchor for you to bend or twist the trunk around in any direction you choose. Then use the twine to pull the stem however you like, and tie it off through one of the holes you drilled. Leave the knot or any wire loop a little loose so it does not cut into the “trunk” of your tree as it grows wider. Similarly, you will tie and train the branches in whatever directions you choose. 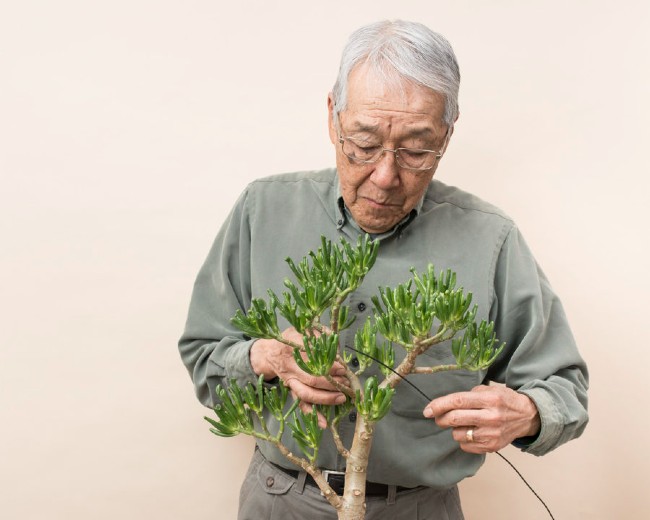 The bending of the branches is what forms the unique shapes and sizes of bonsais. photo credit

Inevitably, your plant will try to grow as large as it can, and you will need to prune it back down to whatever size and shape strikes your fancy. This is also an opportunity to increase the airflow around your plant, and prevent mold from forming in dark, humid pockets. Be sure to prune new branches, not the older ones. Cutting older branches will not only remove the most mature and effective parts of the plant, cutting new growth will also discourage the plant from growing larger.

Of course, whether or not your canna-bonsai goes to flower is up to you.

What Strains are Best for a Cannabis Bonsai?

As a general rule, sativas tend to grow taller, doubling — or even tripling — in height during the flowering phase. Indicas will only double at most, with many only growing by about half. However, if you keep your plant in the vegetative stage, you will not have to maintain the aggressive growth of the flowering stage.

Autoflowering plants are great for micro-grows, but that doesn’t mean they’re great for bonsai.

They don’t rely on specific lighting schedules or spectrums to switch from the vegetative stage into the flowering stage, and they tend to remain relatively small. The catch is that they are often smaller because they switch to flowering after a specific amount of time, regardless of light. An autoflowering plant can be used as a bonsai tree, but it will flower and die within a few months. If you plan on harvesting your bonsai, then this is not a problem. The problem, then, is that you will have less time to prune and shape the tree. Remember, a photoperiod plant that relies on light schedules can survive in the vegetative stage for years.

Remember, the beauty of bonsai is in the process as much as the product. You don’t need a plan to begin, as long as you begin. Still, we’ll want to see those crazy little trees, so share your experiences or links to images below!

Have you ventured into cannabis bonsai or are curious about it? Share in the comments!