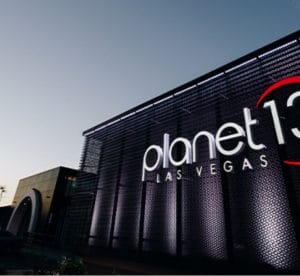 Investors looking to cash in on Nevada’s high-growth cannabis market should check out an undercover cannabis stock that is an early industry leader in the state.

Planet 13 Holdings (CSE: PLTH, OTC: PLNHF) is one of the largest cannabis companies in the U.S., with a market value of $1.3 billion. Headquartered in Las Vegas, Nevada, Planet 13 is a broad play on Nevada’s economic recovery.

Planet 13 has a strong presence in Nevada’s most important city, Las Vegas, where the company owns a production facility, a processing facility, and two retail dispensaries.

One of those dispensaries is 112,000 square feet, one of the largest cannabis stores in the U.S. It is also located next to the high-traffic Las Vegas Strip.

Planet 13 just made a huge upgrade to this dispensary in September, doubling the size of the retail floor and adding another 40 cash registers. With Nevada and Las Vegas economies recovering, this dispensary has a shot at being one of the highest volume stores in the U.S.

Even before the upgrade, Planet 13 has been cashing in on Nevada’s economic rebound. Second-quarter results from late August included huge revenue growth.

In addition to the upgrade on its flagship Vegas store, it just opened the largest dispensary in the state of California in Santa Ana.

Revenue from these two investments will start coming online in the next few quarters and that should fuel more revenue growth.

In a press release from Planet 13, the company announced the development of a 55,000 square-foot SuperStore with over 16,000 square feet dedicated to a retail area.

The full experience location will include areas for memorabilia sales, ancillary retail, and a cannabis consumption lounge. Once in operation, Planet 13’s location will be California’s largest dispensary complex.

In addition, this SuperStore will be located within 10 miles of Disneyland and 4 miles from the largest mall in Southern California.

Planet 13 Shares Are on Sale

Planet 13 shares have been weak with the broader cannabis sector in 2021, falling 50% from the 52-week high.

Cannabis stocks are known for extreme volatility and these big declines have historically led to big rebounds.

The Big Picture on Nevada and Planet 13

Nevada is rebounding from the COVID recession, and that has set the stage for a strong recovery in the second half of 2021. That is good news for Planet 13 and its Las Vegas SuperStore.

Planet 13 should cash in on higher foot traffic in the second half of 2021, and that should give shares more support on the chart.

About the Author & Cannabis Stock Trades

Michael Vodicka is an equity analyst with more than 20 years of experience trading and investing. His research has been featured in some of the industry’s most respected publications. He has been investing and leading investors in the cannabis sector since 2013.

Mr. Vodicka brings his expertise and guidance to the members of Cannabis Stock Trades.

The post Cash in on Nevada’s Economic Growth with this Cannabis Industry Leader appeared first on Cannabis Stock Trades.