Does Incense Hide the Smell of Weed?

Dec 17, 2021
Master Growers Are Pulling 6 Figures and So Can You just use discount code: bws20 during enrollment Here while coupon code is still active!

If a weed version of the game show Family Feud ever gets onto the air, the audience poll’s top answer for “Best Thing to Cover Up Weed Smell” is going to be “Incense.” For a couple generations of cannabis consumers, incense has been the go to for covering up any marijuana ghosts still haunting your room or car after you and your friends finish a sesh. Of course, the use of incense goes back even further than that. But does the trusty odor-masking product help cover up the trademark smell of marijuana?

Incense has a long history that dates back to the prehistoric Egyptians as well as the ancient Indian and Chinese civilizations. The fragrant stick has been used for occasions as varied as religious ceremonies, aromatherapy, repelling insects, celebrations, and sometimes to cover up the smell of bodies (deodorant and refrigeration are still relatively recent inventions). With a long resume of aromatic versatility like that, why wouldn’t incense be the best choice to cover up the smell of your weed once you’ve stashed your bowl or stubbed out your joint?

The truth is that incense may not be as effective at dampening the many odors of herb as we would all like it to be, and there are other options to consider when looking to hide the smell of weed.

Does Incense Hide The Smell of Marijuana?

Before diving into whether incense is the best aromatic for clearing a room, let’s talk about the two different types of smells that we may be trying to combat when it comes to weed. Fresh weed should smell skunky, pungent, flowery, sweet, or piney. Or — if it’s not great weed — kind of like hay. 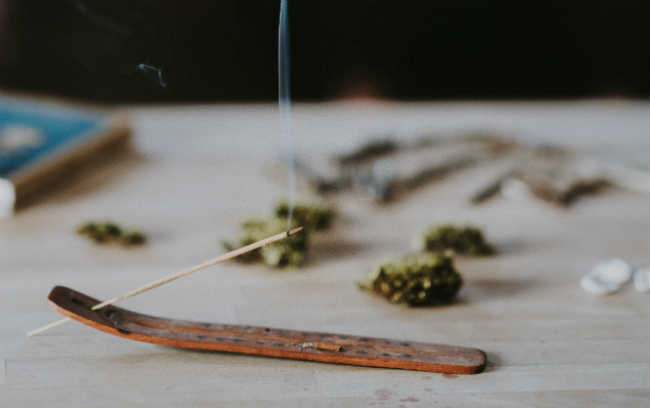 Either way, this is not the worst smell in the world and a welcome thing to have in your home as long as everyone’s cool with it. The second kind of smell is that burnt, musty, ash-tray stench of spent bowls, old roaches, and well-seasoned bong water. Unless you’re trying to base your whole personality around the “I’m a stoner” vibe (look, we’ve all been there), these aren’t the smells you want lingering around your place.

Lighting up a stick of incense to hide the weed smell can certainly cover for both these types of cannabis aromas in the short term. If your parents, your roommate, or anyone else who doesn’t want you smoking marijuana walks into the room where you’ve just burned down an incense stick to hide the weed smell, you’ll at least have plausible deniability. You could say that you were meditating real hard and that’s why your eyes are all red. As an added bonus, incense has aromatic benefits from naturally occurring terpenes that can contribute to your cannabis experience.

Perfume smells like lavender can be relaxing, giving the pot you just smoked an extra chill vibe. Smells like cloves or pine can give you a little energy boost if you’re looking to head out after.

Plus, incense just smells good, and the smoke dancing off that stick into the air is really relaxing to watch. Even if you’re not using incense to hide the weed smell of your session, it can be nice to just light some up anyway.

However, even incense has its limits when it comes to covering up scents, whether we’re talking human bodies or bowls. The perfume smell is going to dissipate out of the room at some point, usually once that glowing ember reaches the end of the stick. If your wand of incense is now ash, the weed smell is going to come right back just as strong as long as your roach, your bowl, or your bong is still hanging around.

It should also be noted that health wise, it’s not the best to be breathing incense smoke in a confined area all the time. There are chemicals in most incense sticks that are known to be harmful in the long term, and so reducing your exposure to them is always recommended.

Other Methods for Hiding Marijuana Odor Besides Incense

So, if not a stick of incense for marijuana, what is the best way to cover up your weed smell in the long term? Should you insert a plug-in deodorizer into your outlet to keep that smell covered consistently, even when you leave the house? Should you light a scented candle to make your apartment smell like a New England woodworker’s shop or a painter’s idea of the ocean?

Whatever aromatic method you choose is really up to you, but the best way to cover scents long term is to get rid of them or prevent them in the first place. Opening up your windows and keeping a fan on while you smoke will help guide that marijuana odor out the window rather than letting it soak into the walls, hard surfaces, or the fabrics of your room.

Buying some odor absorbers will also soak up the small particles of carbon, tar, and terpene that are causing the smells in the first place rather than trying to cover them up with another smell afterwards. 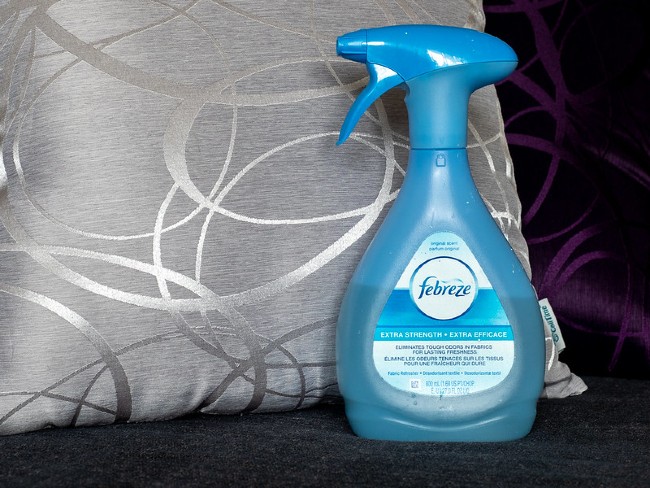 There are several better options than incense for hiding cannabis smell and covering up smoke odor. photo credit

It also helps to undertake a couple of light post-smoking chores to get rid of the smell right off the bat. Knock out your bowl in the trash once you’re sure the ember is out. Get that ashtray of roaches off the table and empty it out. Pour out your bong water and leave it tipped upside down (you should do this after smoking a bong anyway in order to prevent the growth of harmful bacteria). Once you’re done, or in a reasonable amount of time, take out the trash and then open up some windows. You won’t need to light any incense to hide the weed smell at all unless you’re feeling that vibe or have to do some spring cleaning later.

However, if you’ve just smoked a bowl, a bong, or a joint and need to get rid of that smell, but are maybe not feeling super motivated at the moment to clean up for some reason (who can say why?), then light up some incense to hide that weed smell and enjoy. Sometimes, the ancient ways are still best.

Can You Smell Weed Through Incense?

Yes. Incense can help mask the smell of weed, but it’s much more effective if you also air out the room and get rid of your ashed bowls/joints. Incense won’t remove weed smell, it only helps to cover it.

How Long Does Incense Last?

The usual stick of incense lasts about 20-40 minutes. After that, it won’t hide the smell of your weed.

Do you use incense to cover up marijuana odor? Why or why not? Share your thoughts and experiences in the comments below.

6 TikTokers to watch while stoned

6 TikTokers to watch while stoned