Dec 5, 2021
Master Growers Are Pulling 6 Figures and So Can You just use discount code: bws20 during enrollment Here while coupon code is still active!

You’ve probably heard it said that everything old is new again, and the same goes for cannabis and beer, composed of fermented yeast and hops. Humans have a long and storied history with both substances; cannabis seeds have been unearthed at archaeological digs in Asia that date back to 8,100 BCE, and Herodotus – that old Greek historian, writer, and geographer – reported that Scythians were high on weed in 450 BCE.

Not to be outdone by cannabis, the first hard evidence of beer production dates back to the Sumerians of ancient Mesopotamia (now the Middle East), where ceramic vessels sticky with beer residue were dated to 3400 BCE. In our modern days, a recent Gallup poll found that 60% of U.S adults drink alcoholic beverages. Of that 60%, beer is consumed most often, at 39%. A separate Gallup poll covering cannabis found that 49% of Americans have tried cannabis during their lifetime, and 12% are regular consumers.

What Hops and Marijuana Have in Common

There’s no doubt that humans love the altered states of consciousness that both beer and cannabis can provide, but methinks there is something in common between them — specifically the hops in beer — beyond what alters the mind, and that commonality is that cannabis and hops belong to the same taxonomic family, Cannabaceae.

Before they were formally grouped together in 2012, people’s eyes and noses were telling them that hops (whose scientific name is humulus lupulus) and weed (cannabis sativa) had a lot in common. Visually, the leaves of both plants have palmate lobed leaves, meaning that they have lobes that radiate from a common stalk and resemble an open hand. 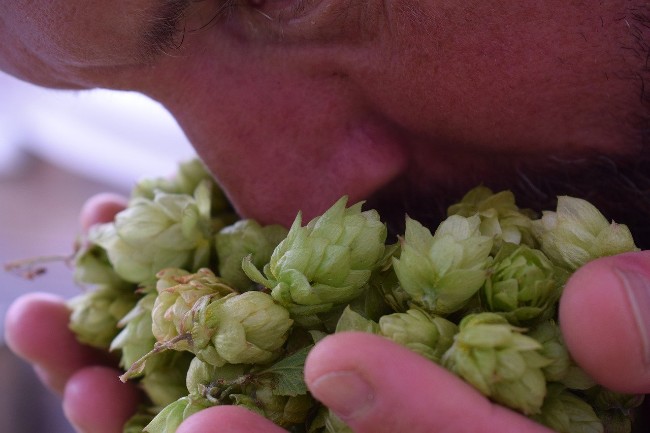 The smell of cannabis and hops is also very similar. photo credit

But the nose sniffs out what most people don’t see. Marijuana and hops have similar organoleptic (taste and smell) properties because of shared terpenes, including those commonly found in cannabis plants, such as myrcene, beta-pinene, and alpha-humulene.

You could even smoke hops if your heart desires, but don’t expect any psychoactive results. One person who experimented with vaping hops said of the final result, “Think of it as if you had complete control over the burp you expel from chugging a bottle [of beer]. When you breathe out, you’re exhaling a pure hoppy flavor with hints of juniper, berry, and pine. It’s thick, citrusy, and full.” Sounds delicious.

What About Weed Beer?

Last April, Forbes asked, “Is Cannabis Beer the Next Big Trend in the U.S.?” The short answer is maybe, based on a nugget of info pulled from the AB InBev (the parent company of Anheuser-Busch) 2020 annual report that indicated that the company is investing in the low and no alcohol beer market.

Why is this meaningful? Because as current federal law stands, cannabis remains a Schedule I substance, and it is not legal to sell alcohol infused with weed in any state (never mind your friend who said they had a weed cocktail at some bougie bar). 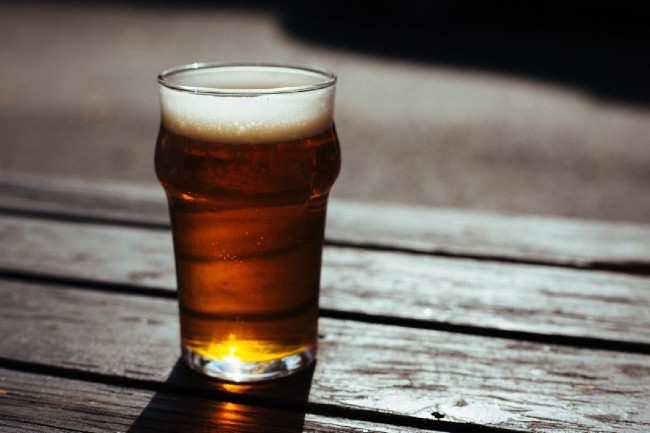 Due to federal laws, there is not yet a true “weed beer”. photo credit

If a business is operating within the legal strictures, they will have a permit to sell either one substance or the other, but not both.

There are definitely THC and CBD infused beers out there, but they are non-alcoholic. Maybe one day in the future, if the federal government comes around on legalizing cannabis, we can finally learn if drinking alcohol and marijuana from the same cup is a worthwhile idea.

These two plants have been a part of civilization for thousands of years, and we are only now beginning to understand their commonalities. The terpene myrcene (as well as others) is prominent in both plants, and may help to understand our affinity for them. The cannabis industry is certainly looking for new ways for beer and weed to work together, continuing their timeless bond through the ages.

Are hops related to cannabis?

Indeed. They are in the same taxonomic family, cannabaceae.

Can you smoke hops?

You could, but don’t expect a high like you’d get from THC. Hops are known to have sedating effects, but no psychoactive effects have been reported from reliable sources.

Are hops part of the marijuana family?

Why yes, they are.

Are hops related to hemp?

Yep. Hops, marijuana, and hemp are all in the same cannabaceae family.

Do hops have psychoactive properties?

In its strictest definition, “psychoactive” means affecting the mind. If we think of hops as traditionally used in beer, your mind could be affected, but that’s the alcohol at work, not the hops. On their own, the only scientific source we could find said that hops may have a sedating effect.

What are your thoughts on cannabis and beer? Discuss in the comments below!