G rowing cannabis for personal use is permitted in 19 states, all of which limit the amount of plants a person can have. For instance, Connecticut allows medical patients to grow 6 plants, while Colorado allows up to 18. Medical patients in Oregon can also grow up to 18 plants, but recreational users can only grow 4. To further complicate these laws, you may only possess certain numbers of mature and immature plants. So, what’s the difference between a mature and immature cannabis plant, and when does one become the other?

This article will examine the laws regarding cannabis cultivation, identify the difference between mature and immature cannabis plants, and offer tips to avoid going over the limit.

Every state that allows cultivation, whether medicinal or adult-use, strictly defines how many mature and immature plants a person may possess, without always defining exactly what the difference is. When some states do try to define the difference, it can raise even more questions.

For example, Michigan defines an immature plant as “a nonflowering marihuana plant that is no taller than 8 inches and no wider than 8 inches produced from a cutting, clipping, tissue culture, or seedling that is in a growing/cultivating medium or in a growing/cultivating container that is no larger than 2 inches wide and no more than 2 inches tall that is sealed on the sides and bottom.”

Conversely, Vermont defines an immature plant as simply “a female plant that has not flowered and does not have buds.”

The notable language across these examples is “nonflowering plant,” or some other delineation before and after the flowering stage has begun. Michigan’s language, copied and pasted by Virginia, is surprising because few growers would ever consider an 8-inch plant “mature” (unless that grower is micro-growing in something like a space bucket). Michigan also identifies the growing container, effectively limiting immature plants to seedlings, which are generally propagated in trays with 2-inch cells. By this language, as soon as a seedling is transplanted into a larger container — even by a few inches — it no longer meets both criteria for an “immature” plant, meaning that it must be counted as “mature” even though it is nonflowering and, at only 8 inches tall, will likely remain nonflowering for another month or more. 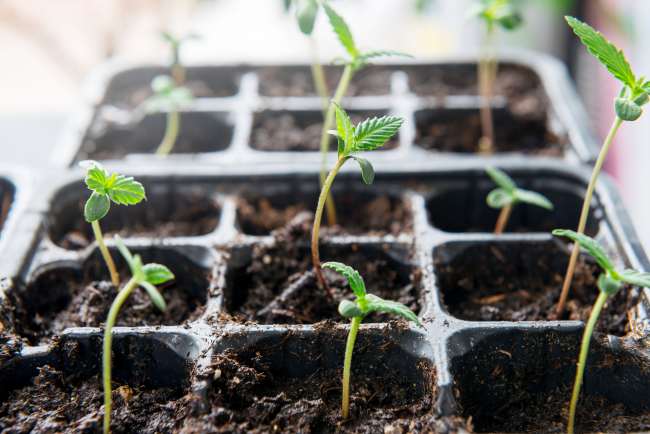 Once a seedling is transported out of a 2 inch container, Michigan and Virginia consider it “mature.” photo credit

Now, it’s unlikely the police will kick in your door with a state-financed measuring tape, but for folks trying to do right by the rules, those rules leave a large gap in the harvest cycle of something we’ve agreed is medicine.

To view this issue from another direction, let’s review the life cycle of a cannabis plant.

Growth Stages of a Cannabis Plant

The life cycle of a cannabis plant can be broadly categorized into four stages: germination, seedling, vegetation, and flowering. 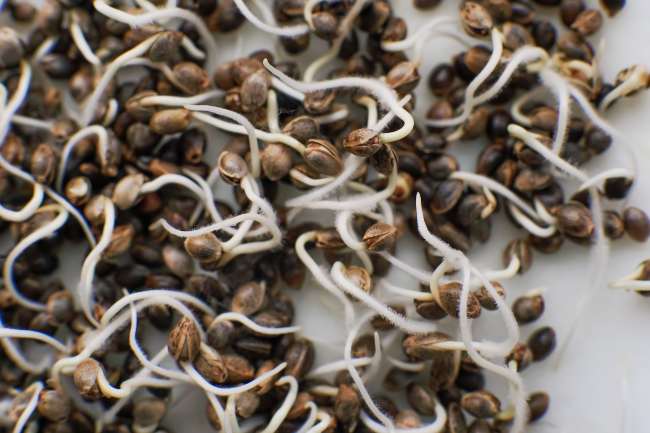 The first stage of the cannabis life cycle is when the seeds get germinated. photo credit

Germination begins with the seed, which “germinates” by cracking open and sprouting a taproot and a first set of leaves (called cotyledon, or “seed leaves”). Once the seed has germinated, you’ve got a seedling. 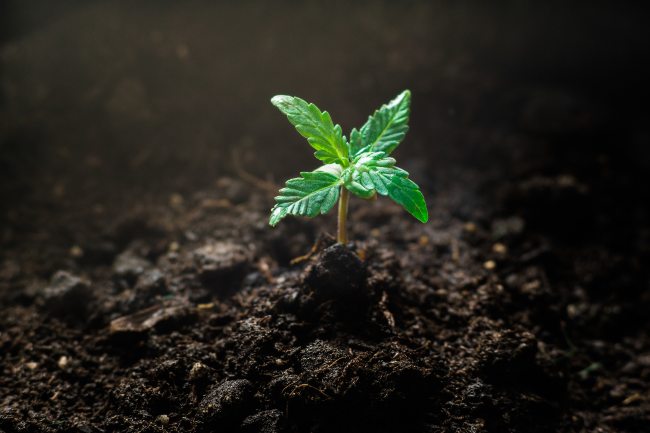 The second stage of the cannabis life cycle is when the seed turns into a seedling. photo credit

Cannabis typically remains in the seedling stage for about two weeks, drinking in light and water while it grows its first set of serrated leaves (called “true leaves”). In all states that allow cultivation, these baby plants are firmly considered “immature.” But after about 14 days, these stable seedlings are then transplanted into bigger containers where the roots can spread out. In Michigan and Virginia, this move would violate the definition of an immature plant, thus rendering it “mature” in the eyes of the law. The problem is that this three-week-old plant likely won’t grow flowers for another two months. 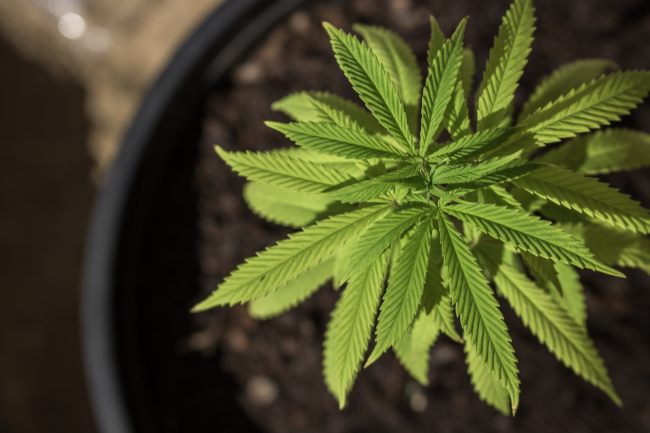 The third stage of the cannabis life cycle is when the seedling turns into a larger plant, with the stalk growing upwards and leaves growing out. photo credit

Depending on the strain and environment, the next 4-12 weeks comprise the vegetative stage where the plant grows its body. Stalks reach up to the light, leaves fan out, and roots extend to fill the space available. In fact, this stage can actually go on even longer by photoperiod manipulation, because the plant will wait for amber, autumnal light before producing flowers. If the plant only receives blue, summer light, then it will grow near indefinitely. In states like Oregon and Vermont, even an 8-foot plant in the vegetative stage is considered “immature” because it is not yet producing flowers where THC is synthesized. 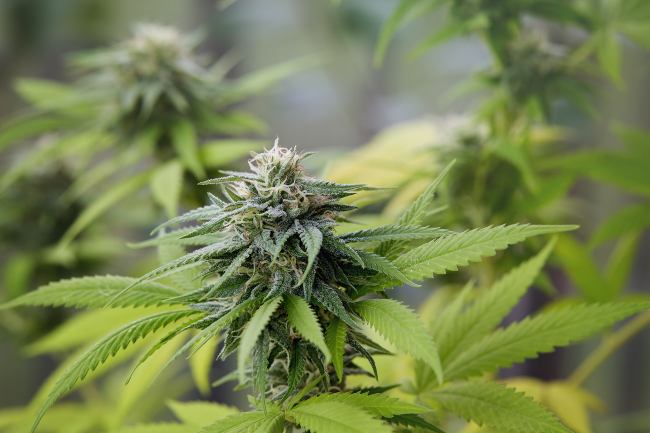 The last stage of the cannabis life cycle is when the plant starts growing buds. photo credit

The flowering stage is the final stage in the process, and the stage in which THC is produced. In all states that allow cultivation, any plant actively producing THC is firmly considered “mature.” But that doesn’t mean smokeable weed is being plucked from it like apples from an apple tree. The flowering stage may continue for another 6-12 weeks, before the harvest is then dried and cured over an additional month.

All told, the process of growing cannabis from seed to harvest can take up to 8 months, with the seedling stage accounting for about 14 days of that, making Michigan’s legal language all the more frustrating for those who rely on homegrown weed.

Growers focusing on only a few plants from beginning to end should not be affected much by these laws. But for those continuously growing, for instance to avoid high dispensary costs, the balance between mature and immature plants can be a challenging one, particularly when some strains remain flowering for so long.

In most states, the difference between maturity and immaturity is the difference between flowering or not flowering. If you’re growing in a tent or other isolated space, then light manipulation can be used to keep cannabis plants in an “immature” vegetative state for several weeks. By this method, once the mature plants are harvested, a simple light switch can be flipped to induce flowering and bring those plants to maturity. 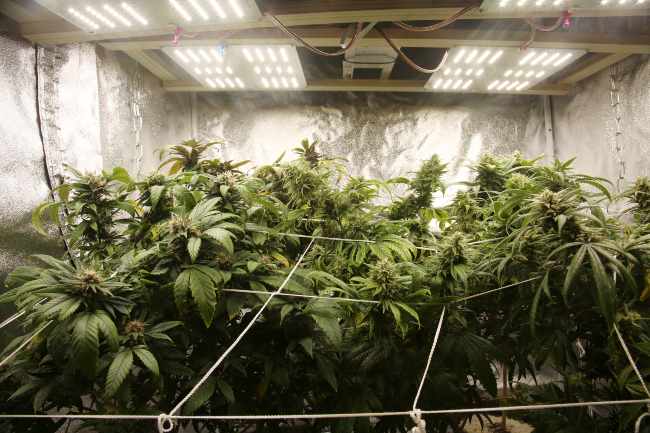 You can manipulate the lighting to keep your plants in the vegetative stage if they are kept in an isolated space. photo credit

Without sophisticated space and lighting, the balance comes down to timing the growth cycles. Flowering times differ by strain, but generally speaking, when one batch begins to flower, it’s safe to plant the next round of seeds. By the time those flowers are harvested, the seeds have ideally grown through the vegetative stage and are prepared to flower. Plant and repeat ad infinitum.

Most growers will likely not be hassled by police for the size of their plants or growing containers unless the violation is egregious (such as double the amount allowed, or near a school). But many of these planting limits are quite accommodating, and when maximized can result in pounds of smokable product.

What is Considered an Immature Cannabis Plant?

In most states, an immature cannabis plant is defined as a female plant that has not yet produced flowers.

What is an Immature Plant?

An immature cannabis plant, in the eyes of the law, is a plant that cannot yet, or is not yet, producing flowers that contain THC.

What are Immature Seedlings?

Immature cannabis seedlings are young plants that have recently sprouted and are still very small. Every state that allows cannabis cultivation recognizes seedlings shorter than 8 inches as “immature.”

What Defines a Mature Cannabis Plant?

A mature cannabis plant is a plant in the flowering stage of life, when THC is synthesized in the budding flowers.

How do you juggle your mature and immature plants? Share your wisdom in the comments below!