How to Use a Vape Pen

Dec 3, 2021
Master Growers Are Pulling 6 Figures and So Can You just use discount code: bws20 during enrollment Here while coupon code is still active!

In its simplest explanation, a vape pen — as the name suggests — is simply a pen-like device that holds cannabis oil or concentrate. Vape pens come in both reusable and disposable variations and there’s a type for almost every budget. Many consumers prefer using vape pens because they’re hassle-free, convenient and discreet.

As a consumer, when you draw on the vape, all you exhale is vapor. No mess, no ash, no problem. There’s no rolling and lighting of the joint, no dank smell to worry about during and after consuming, no worries about where to leave what remains of your joint. Simply return the vape pen to your pocket or bag and you’re all set.

Weed vape pens are simple devices and come in either rechargeable or disposable. Composed of a tank or cartridge (aka vape cart), an atomizer or heating element, a mouthpiece to inhale, a battery, either rechargeable lithium-ion battery and USB charger, or a pre-charged battery, depending on which kind you get.

Let’s dig in on how to use a vape pen.

How to Smoke a Vape Pen

Vaping weed instead of smoking can feel a little friendlier on the lungs, but be careful — even though it may seem a little less physically intense you should still consume mindfully. If you’re new to cannabis generally, and new to vaping specifically, start by taking one draw then waiting about 5-10 minutes to see how it lands before taking another. Vape pens tend to be significantly more potent than joints, with oil ranging from ~60-90% THC.

Be aware that you’re still likely to cough when smoking a vape pen, though perhaps less so than when smoking a joint. Some people are prone to sneezing when vaping, so be aware of that as well. Starting on a low voltage/temperature can help reduce harshness. 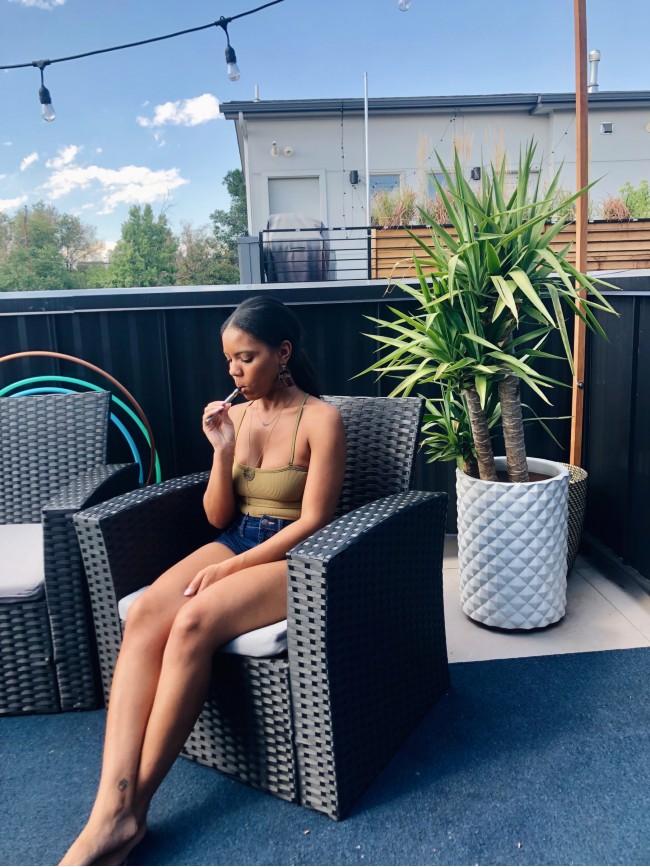 Ripping a vape pen is simple!

In general though, especially when using draw-activated vapes, use really is as simple as inhaling, then exhaling.

To use a draw activated vape, put the pen in your mouth, breathe in gently to draw the vapor, then inhale a larger breath to pull the hit into your lungs. To use a push-button vape, press and hold the button while gently inhaling on the mouthpiece. Release the button to stop vaporizing, then take an inhalation. Hold for a second, then exhale.

Many vape pens will have an auto-shutoff feature after a certain amount of time per hit, but don’t feel the need to keep drawing until the light shuts off, just take a small pull that feels comfortable to you.

Decisions, decisions. Which vape pen you choose won’t influence your high, but it may have an impact on your pocketbook and the environment. Here’s a breakdown on the difference between the rechargeable and disposable vape pens:

Rechargeable vape pens come in a couple of different styles, draw-activated or push-button.

Draw-activated are the simplest to use and could be a good place to start for those new to vaping. There are no buttons to push and they don’t need to be turned on or off. Simply take a draw (or take a puff) and you’re on your way. There’s usually a light to signify that vapor is being produced as you pull.

Push-button vapes are slightly more involved, but still simple to operate. To use a pushbutton pen, press and hold the button while drawing on the mouthpiece. This kind of vape pen needs to be turned on before use as well. Though it may vary from pen to pen, most pens of this type have the same basic controls:

Pressing the button five times in a row will turn the power on (or off). For pens with a preheat mode, push the button twice. To adjust the voltage, press three times.

While these are basically standard operating procedures for push-button vape pens, check the specifics of your pen. Some companies like to add a twist to this standard to stand out.

If your rechargeable vape pen isn’t working, try your own troubleshooting:

A disposable vape pen is exactly what it sounds like, disposable. Though some are push-button, most are draw-activated. Disposable vape pens are all-in-one units that come with a pre-filled cart, coil, and internal battery. When the cart is depleted they can be tossed in the garbage, but do note, the US legal cannabis industry generates 150 million tons of waste every year.

Also, be aware that the dependability of disposable vapes can vary, and at most dispensaries, all sales are final. Try and get some input from your budtender on best options, or check product reviews before purchasing.

At the bottom of most standard 510-thread vape carts, you’ll find a small metal disc with a hole in the middle. The disc sits inside of the threading around it, but is not connected to it. Instead, it is connected to the rest of the cart by the piece of metal in the center. This is the atomizer, which heats up once contact with the battery is made. Ideally, the disc should be flush with the bottom of the carts threading, creating a smooth contact with the battery when it connects.

However, small variances in production, or shifting due to heat, can cause the atomizer to be recessed into the threading. It won’t quite make contact, and thus your vape won’t work. 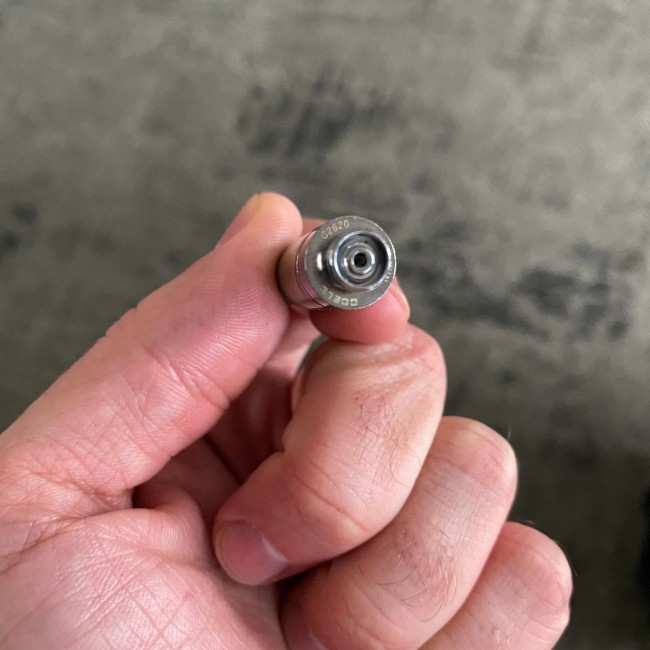 In order to use the paperclip method, look for the atomizer on the bottom of your vape cartridge.

An old budtender trick to fix this problem is to adjust the atomizer into a better position using a paperclip. To do this, unbend a paper clip so that you can use one end as a poking tool. Insert the paperclip into the center hole at the bottom of the cart slightly, then turn it to an angle, allowing you to pull on the disc. Next, gently pull the atomizer outward so that the recessed plate is flush with the threading on the sides. You may want to rotate the cart and pull from different angles to get a flat result.

As you incrementally work the atomizer out further, screw it back on the battery and check at each stage to see if the contention is getting better.  You’re usually only looking to move a distance of about a millimeter, so work in very small increments, with a very light touch. This method should only be used as a last resort, because if you’re not careful, you can easily pull out the atomizer, breaking the cart entirely and trapping your cannabis oil inside.

It’s been said that vaping is safer than smoking because you don’t inhale smoke. While it’s true that vaping is in fact less harmful than smoking, that doesn’t mean that it’s harmless. Vaping may cause the same troubles as smoking, including damage to the heart and lungs. Lest we forget, in 2019 illicit market vapes cut with vitamin e acetate sickened more than 2,000 people and took the lives of 59. Let this be your reminder: buy legal, buy local. Happy vaping!

What is a cart?

A cart, or cartridge is a pre-filled container of cannabis oil, distillate, or concentrate for use in vaping devices.

How do you use a push button vape pen?

While this may vary from pen to pen, try pressing the button five times to turn the vape on, three times to adjust the voltage, and twice to put the pen in preheat mode.

How do you hit a vape pen correctly?

Take a slow and steady draw, hold onto it briefly, and exhale smoothly. Remember the cannabis golden rule; start low and go slow. After a hit, wait 5-10 minutes to see how you feel before taking another hit.

What are your tips for using a vape pen? Share in the comments below!

Arizona Cannabis Generates Over $1B of Revenue in 2021