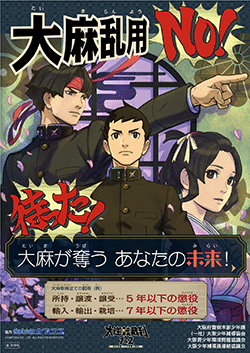 Japanese video game powerhouse Capcom revealed last week that it is lending its hit character Ace Attorney to a campaign designed to prevent cannabis use by young people. The company announced on Thursday that characters from the popular video game series will be enlisted to fight youth cannabis use under a collaboration with the Osaka Prefectural Police department’s juvenile delinquency prevention awareness campaign.

Every year since 2013, Capcom has worked with the Osaka Prefectural Police and the law enforcement agencies of neighboring prefectures to develop and implement crime prevention awareness campaigns. This year, the company received a request from the Osaka Prefectural Police to use the popular Ace Attorney characters for the first time in a campaign to prevent marijuana abuse, “which has seen a conspicuous shift toward younger age groups,” according to a statement from Capcom.

The campaign will feature characters from The Great Ace Attorney Chronicles, which was released in July, in flyers and posters to be distributed at educational institutions, community police facilities, and train stations throughout Osaka Prefecture. The artwork includes the classic Ace Attorney ‘objection!’ stance as well the word “no” in large red letters.

“Capcom hopes to support crime prevention activities in Osaka and all of Japan through this program, which will see the production of 6,000 original posters, as well as 4,000 original flyers that will be included with individually wrapped face masks,” the company wrote in a December 9 press release.

The company’s support of the campaign is part of its program to nurture regional revitalization efforts throughout Japan by capitalizing on the power of its intellectual property to engage people in four areas including economic development, cultural awareness, prevention education and election participation. The company has carried out various initiatives since 2009, such as concluding the first comprehensive agreement between a video game company and a local government body, collaborating with prefectural police in the Kansai region on prevention activities, and working to raise awareness of gubernatorial elections.

The Ace Attorney series, which celebrates its 20th anniversary this year, features courtroom battle games where players take on the role of a defense attorney who fights for the lives of their wrongfully accused clients. Since the first game in the series was released in October 2001, Capcom has grown the brand through a comprehensive, multi-platform marketing strategy, leveraging it in mediums such as animated television shows, stage performances, and orchestral concerts. The Ace Attorney series has grown to become one of Capcom’s most popular, with cumulative shipments totaling 8.6 million units as of the end of September.

Although cannabis has been cultivated in Japan for thousands of years, the nation prohibits the import, export, cultivation, sale, purchase, and research of cannabis buds and leaves for recreational or medicinal purposes under the 1948 Cannabis Control Law. Production of hemp, which is utilized in some Shinto religious practices, is legal, and CBD products containing no THC have been available since 2016.

Japan has some of the most severe penalties in the world for violations of marijuana prohibition laws, including jail sentences of up to five years for simple possession. Penalties for cannabis sales, cultivation, and possession for sale are even more severe, with sentences ranging up to 10 years in prison.

Despite the risk, cannabis is the second-most popular illicit drug in Japan behind methamphetamine, according to a 2019 survey. Approximately 1.8% of people said they had used cannabis in their lifetime, compared to about 44 percent of Americans. Although efforts to reform cannabis prohibition laws have taken root in other east Asian nations in recent years, the Japan Times reported in 2021 that “political momentum for legalizing cannabis” in the nation “is essentially nonexistent.”