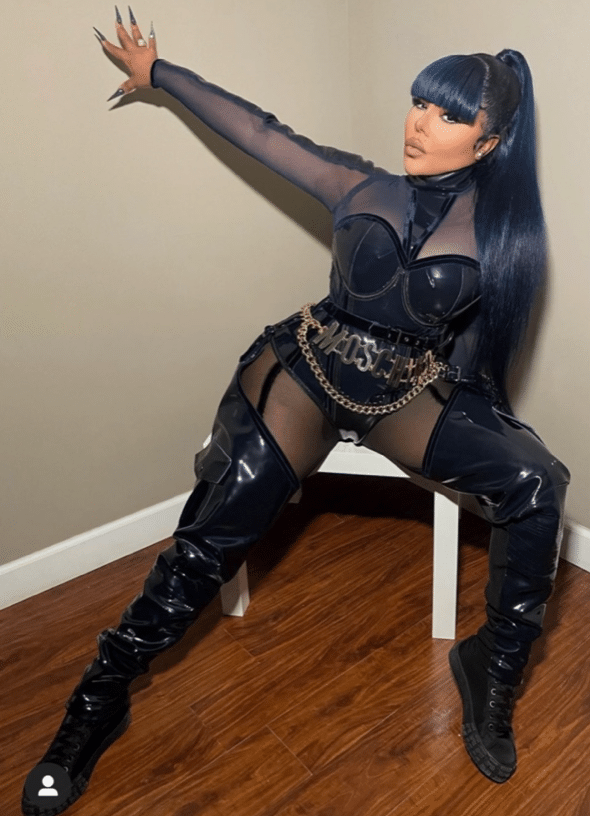 Hip-hop legend and fashion icon Lil’ Kim is the latest celebrity to enter the cannabis fray. Partnering with California pot brand superbad inc. and tech platform CampNova, the Brooklyn native joins the marketplace and a growing list of celebrity brands aiming to stake their claim in the booming cannabis game.

In addition to personal market success, Lil’ Kim and her business partners hope to inspire more Black and female entrepreneurs to join the industry as business leaders.

She spoke with High Times at the 2021 MJBizCon in Las Vegas, where all involved parties made the media rounds on its final day. Joined by superbad CEO Carlos Dew, Lil’ Kim said that the partnership comes after a lengthy but necessary process that involved market watching and a good deal of R&D from the Queen Bee.

“We’d go back and forth throughout the years,” reported Dew, adding that they decided now was the time to move forward, with legislation and market developments trending upward.

Lil’ Kim, a 2017 headliner at the High Times Canada Cannabis Cup, agreed with Dew. The self-described hustler added that pot had always been a market she wanted to enter. She stated that other brands had approached her over the years, but she never felt ready to make a move on any opportunity.

“I’ve been doing my homework and research on it,” said the artist and enthusiast.

She elaborated on why now was the time to get involved. “It’s the way of the world right now,” asking rhetorically, “Why not?”

Product quality was just as important. Wanting to live up to the quality cannabis she’s been exposed to in Brooklyn and beyond, Kim said that the product had to be of the highest quality.

“I’m surrounded by cannabis smokers—everyone around me,” she stated. “I have expensive taste.” After sampling what superbad had to offer, Kim said she came across the gas she was looking to align with.

What to Expect from Lil’ Kim in Cannabis

The trio focused on grander goals while saving product specifics for a later date.

Dew said that plans are in motion, but that they’d prefer to hold off on releasing any more information for now. “We’re going to do everything in phases; then it’s going to hit,” he stated. The trio did not announce when the next phase of news would roll out.

CampNova Co-founder Emery Morrison stated that Kim’s partnership would include promoting products through various video and audio efforts. CampNova is a tech e-commerce platform that he says is “socializing the process of ordering.”

In essence, Morrison stated that the platform functions like a combination of UberEats, Fashion Nova and Weedmaps, offering customers access to in-demand products through tiered membership. Customers can use the service for free or subscribe to monthly paid tiers for discounts and bonuses.

Lil’ Kim joins a roster of notable partner brands in and out of cannabis, currently offering between 30 and 40 brands on the platform. The star joins a CampNova roster that includes 2 Chainz, Cann, Mickey Hart, Carlos Santana, Lamar Odom, Jay-Z, Ricky Williams, Mike Tyson, Jerry Garcia and several others.

The company is also involved in the branding and product selection side, depending on the brand’s preferred sales and marketing plan. CampNova’s recent efforts include online social media promotion as well as physical activations.

In August 2021, the company linked up with Lil Wayne’s GKUA brand, giving free VIP livestream access to his show at the Los Angeles Memorial Coliseum with every purchase of GKUA’s Ultra Premium product made through CampNova.

The group did not expand on what activations Lil’ Kim would be involved in. Offering a top-level overview, Dew stated that customers could expect an offering that equals Lil’ Kim’s status as a fashion and music icon.

With hope, Lil’ Kim will continue to push the California-based brand into iconic status as well. The premium millennial-focused indoor line is currently sold in four Southern California counties, offering flower, pre-roll joints and badder. Officially launched in October 2020, the L.A.-based superbad touts itself as “the brand of the culture,” asking consumers, “How bad are you?”

The cannabis brand’s desire to be “the perfect accent” to a modern lifestyle fits right in with Lil’ Kim’s brand. Dew discussed how his company’s vision aligned with Lil’ Kim and CampNova.

“Our whole thing is quality. So, Kim is going to bring a super quality,” he stated.

Kim elaborated, stating that she opted to partner with superbad after determining the brand was “sophisticated, classy and well-thought-out.” She added that she didn’t intend to slap her name on a brand, a move that often seems to be the case with specific celebrity endorsers.

Influencing Other Women and Girls to Become Business Leaders

The partnership between Lil’ Kim, superbad and CampNova carries additional significance, with all principles involved being Black entrepreneurs.

Morrison, whose background is in marketing and branding, working with top names like T Mobile and Monster Audio, highlighted the collaborative partnership between the three.

He said all parties are committed to ensuring each brand sees continued success, a strategy CampNova applies to each partnership. Doubling down, Morrison said it’s essential to support a project highlighted by a high-profile Black female hip-hop artist.

“There’s no other brand out there like that,” he stated.

If the venture does succeed, Morrison sees it creating an influence on other young Black girls, including his three daughters.

“I want them to see someone that’s a Black woman handling her thing so that they can dream,” he explained.

Dew offered a similarly optimistic view on Lil’ Kim’s potential impact. He stated, “I think she should be able to show the path forward for how women can start getting into the cannabis community and build their own businesses.”

Lil’ Kim delved into a similar ideal outcome. “I want to empower women to get more involved.” More specifically, she emphasized that she wants to let women know that they can do anything.

Small in stature and enormous in presence, Lil’ Kim has been a fixture in the entertainment and fashion worlds for decades. With explicit lyrics and a persona dripping in sex appeal, Lil’ Kim was one of the early female rap artists to help push and normalize female written sexually charged lyrics to a level where men often went with much less criticism.

Her debut album Hard Core went double platinum in the U.S., helping propel a career that includes a collaboration with Missy Elliot, Pink, Christina Aguilera, and Mýa on “Lady Marmalade,” and five studio albums. She has sold over 15 million albums and 30 million in singles throughout her career.

The Bedford-Stuyvesant, Brooklyn native was also part of the famed Junior M.A.F.I.A trio consisting of her, Lil Cease and the legendary Notorious B.I.G., who discovered Lil’ Kim in 1994. Lil’ Kim joins a cannabis market that includes B.I.G.’s son, C.J. Wallace, who launched his cannabis brand Think BIG in 2019.