Hip Hop and weed are like peanut butter and chocolate: two great tastes, together at last. Or, in the case of rappers and weed, together since the start. Every generation of rappers have had a few known to smoke the most weed before hitting the studio. Back in the day it was Snoop Dogg, Cypress Hill, and Method Man. These days it’s hip hop stars like Smoke DZA, Eighty4 Fly, and Dizzy Wright.

PotGuide is here with a list of rapper weed strains you should know: 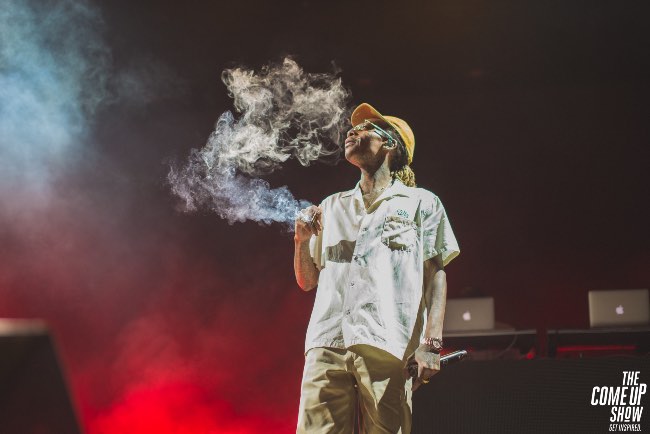 With tracks like “Good Dank“, “Stay High“, and “Still Blazin’“, Wiz Khalifa was destined to have his own weed strain. He worked for a long time with Berner’s Cookies brand getting his rapper weed brand just right and it shows in the final product. With a lemony smoke tinged with pine, Khalifa Kush provides an inspiring, clear-headed, creative uplift accompanied by calming, light body effects. This morning to midday strain is best smoked by any creatives looking for that extra edge to express themselves.

A founding member of the legendary Wu Tang Clan, Method Man (aka Johnny Blaze) was all about that smoke from that lyrical blunt, so it makes sense he’d have both his own rapper weed strain and his own rapper weed brand: Tical. The smoke from his indica-dominant C.R.E.A.M strain has a creamy vanilla berry flavor cut with some tangy citrus hops. The effects are chill, floaty, and upbeat – perfect for hanging with your friends before heading out for the night. In other words, this is a rapper weed strain for when you’re about to go get lifted.

Freddie Gibbs and weed go way back, including the hilarious story from 2015 when TSA returned the two bags of weed he had in his luggage with a note reading “C’mon Son.” Freddie Gibbs decided to get into the weed business, but made sure he’d be selling only the best chronic he himself would be smoking. Freddie Kane OG is one of the strongest indicas in the rapper weed strains, a potent, stoney type of high that’ll weigh down your limbs. Freddie Gibbs recently added to his expanding repertoire with his new weed strain, Alfredo OG, to celebrate his latest album’s release.

With his debut album, Smokeout Conversations, released on 4/20, Dizzy Wright made it known early on that he’s a rapper who smokes weed, and now has his eponymous rapper weed strain.

Dizzy OG is a weed strain made for anyone like Dizzy Wright who’s smoked themselves into a high tolerance. The smoke is fruity with a hint of pine, and leads off with a throbbing headband pressure that grows into a euphoric lucidity before gradually dropping into a giggly, pain-free couch-lock for the rest of the night. 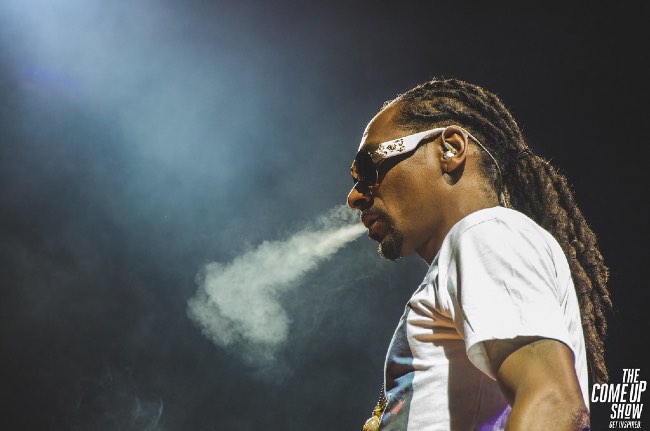 Snoop Dogg has always been open about his cannabis use and is possibly the most well known weed smoking rapper. photo credit

If Snoop Dogg didn’t have his own weed strain, all would not be right in the world. Perhaps the rapper most identified with smoking weed, Snoop Dogg didn’t skimp out when it came to his eponymous weed strain. A cross between the well-loved Blue Dream and award-winning Master Kush, Snoop’s Dream has a fruity blueberry smoke mixed with crisp pine. The effects of this balanced hybrid are much like Snoop’s flow, laid back, vibing, but still crisp and clear.

Legend Has It that Killer Mike, one half of the politically charged rap duo Run the Jewels, loves him some herb. Grown in collaboration with Berner, this strain is “Out of Sight“. This hybrid heightens your senses while maintaining a light body feel, keeping you on The Ground Below. You won’t have to “Lie, Cheat, or Steal“ to get your hands on this herbal fruit-flavored smoke, and once you smoke it there’s No Come Down.

The hip hop star behind such tracks as “Purple Haze,” Cam’ron developed his Pynk Mynk strain due in part to his love of the color (and wearing mink coats). Cam’ron’s sativa dominant weed strain has a pungent, spicy woodsy flavor combined with a citrus kick at the back end of the smoke. The effects are clear-eyed, high-octane, and imaginative, making it a great strain for anyone working on their art, or who’s looking to get outside for some fresh air.

One half of Cypress Hill, B-Real wrote classic smoker’s anthems like “Hits from the Bong” and “Insane in the Membrane” so it’d be more shocking if he didn’t have a rapper weed strain. B-Real went all in when it came to the weed industry, opening up a line of dispensaries called Dr. Greenthumb (another hit track) and growing some award-winning weed.

With a sweet orange smoke and happy-go-lucky effects, Tangie is less “Insane in the Membrane” and more “Euphoric in the Cortex.” Maybe that’s why it won 3rd Place in the 2015 High Times SoCal Cannabis Cup for Best Sativa, and the hits just kept on coming.

Hip Hop has been on the forefront of culture since it began, in terms of music, fashion, slang, and weed. Now that cannabis has become a big industry, rappers are getting a chance to invest in and help shape the plant that’s always been such a big part of the culture. With how many rapper weed strains have popped up in the past five years alone, we can expect that hip hop and weed will keep their collaboration going strong. We can all look forward to the new generation of hip hop stars, and the next generation of rapper weed strains.

Have you tried any of these rapper’s weed strains? Let us know in the comments!